This exhibition assembles a variety of artistic perspectives to explore the wildfires in our region: their growing prevalence, the destruction they cause and their connection to climate change. Featuring seventeen Utah artists, it aims to create dialogue between relevant stakeholders such as home owners, emergency workers, artists and policy makers. Some of the artists have been evacuated, some work as firefighters and some have lost property or loved ones. The works are responses to the reality and urgency of the situation and together issue a clarion call for action to mitigate climate change.

For over a century, the American West has been a nexus for several geographically-specific narratives. Among them, the ‘rugged individual’ has played a central role in the character formation and storytelling of this region. More recently, a number of economic and industrial shifts have impacted the identities of the people who live here, leaving their mark upon the Western psyche.  ‘Pride and Pain’ showcases five videos by contemporary women from the American West that register these changes. Works by Cara Despain, Kristina Lenzi, Amy Jorgensen, Susan Krueger-Barber and Hannah Slind feature subjects that have been erased, coerced or alienated by the mega-systems in their lives. These contrast the ‘rugged individual’ of the past, who was stoic, triumphant and unequivocally male.
​ 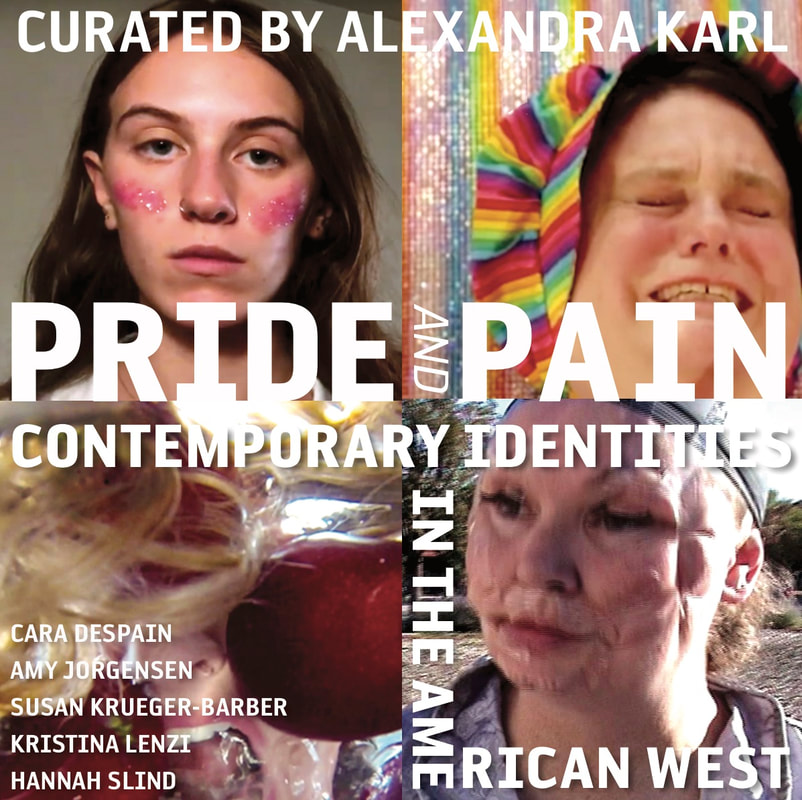 This exhibition assembles selected works by Utah artists who use swimming pools and rivers, window panes and windscreens to expand on a surface approach to the urban and natural world. These devices are employed as lenses and mirrors, and reject single-point perspective. Consequently, the works in this show twist and warp their subjects to create misshapen, contorted and sometimes garbled effects. The results serve a range of goals, from the purely perceptual to the socially critical. Artist include: Jean Arnold, Connie Borup, Alex Caldiero, Cara Despains, John Erickson, Ed Firmage Jr., Kristina Lenzi, David Chapman Lindsay, Brad Slaugh, and Jamie Wayman.
CATALOG with color illustrations and essay available at Ken Sanders Rare Books for $10, and on Amazon for $12 + shipping. See under books for Amazon link.
​PROTEST and PATIENCE: Modes of Agency in Utah Art
The Ladies Literary Club, Salt Lake City, UT                                                            COVID/Cancelled

​This exhibition calls for works of visual, poetic and performative art that explore the role of 'Waiting' as it pertains to the experience of women, wives, mothers and others. Inspired by the 2017 Women's March, and those who opted not to participate, this exhibition invites dialogue between two modes of agency: between taking action and waiting. Indeed, some believe that waiting is central to female experience. In contrast to ‘men of action,’ literary characters such as Penelope (from the Odyssey) and Patientia (from the Psychomachia), are associated with patience and temperance. Of interest to this exhibition are the psychological dimensions of waiting for the women of today. When is waiting a virtue and when is it time for action? Where does one’s mind go, when waiting for destinies to manifest, for fairness to prevail or for society to change? What kind of activities do women invent to pass the time? Does action ever lead to impetuosity? Finally, are these two modes of agency antithetical and irreconcilable? Or are there areas of overlay and commonality that can be imagined, salvaged and celebrated? A broad range of voices are sought, from Mormon to immigrant women, LGBTQi and African-American.